Finally, a new post! With a tough magazine deadline, a longtime employee leaving, and me receiving the promotion to her position, the word “busy” barely begins to describe my life at work lately. But the September/October issue is at print, I’m at the end of a three-day weekend, we’re sliding into a new month, and I can breathe just a wee bit easier.

After running some much-needed errands on Saturday afternoon (Yay for new sheets!), the husband wanted to get some Little Caesars pizza to take home. I may have whined a little.

“But sweeetie, the pretzel crust doesn’t come out until next weeeeek… I want to tryyy it, and I don’t want Little Caesars twice in one weeeeek… Let’s waaait…”

But lo and behold, we stopped in, and there it was, on the fancy rotating digital sign: a HOT-N-READY® Soft Pretzel Crust Pizza for $6. I shouted, with excited, bouncy Heather glee, “Is it really already available?!” My question was immediately answered by the nice cashier girl who turned around to ask, “Would you like to try our new Pretzel Crust Pepperoni Pizza?”

“YES!” (I believe this the only time I’ve ever answered a fast food new promotion stock question like that in the affirmative. It was actually kind of nice.)

Normally, I get a plain cheese pizza (we’ve been over this), but the cashier informed me that with THIS pizza, they couldn’t make it without the pepperonis. I still don’t quite understand this if the pizzas are made fresh. But pepps are easy to pick off, so no biggie. It was a long ride home. I opened the box, and here was my prize:

The scent of the pretzel crust pizza is overwhelmingly cheesy. I mean, the thing itself IS overwhelmingly cheesy, with a creamy cheddar cheese sauce in place of regular marinara pizza sauce and a blend of Asiago, Fontina, Parmesan, and White Cheddar cheeses on top of that. You really have to like cheese, and pretzels, and, well, carbs and salt, to enjoy this pizza. Thankfully, I DO! 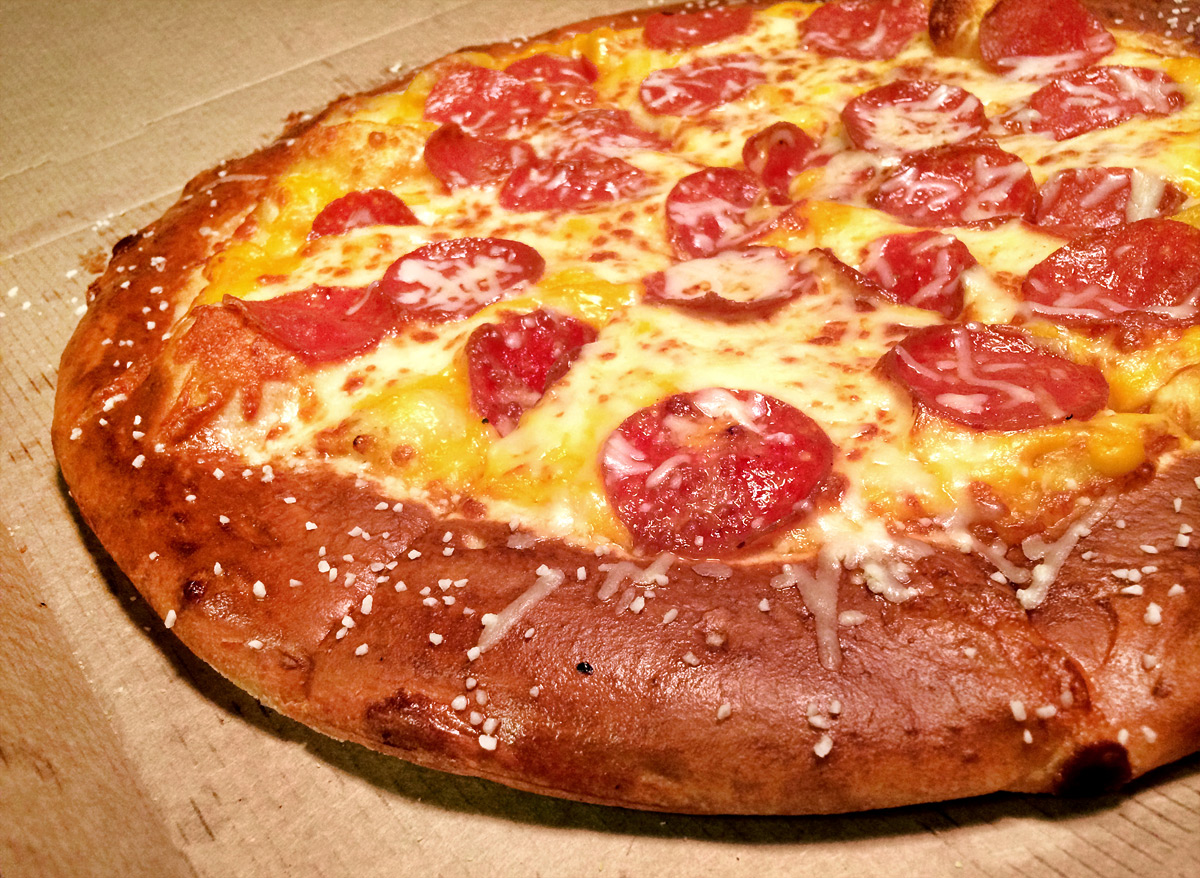 The first few bites of a slice taste sort of like a cheesy bread. You get no sense of pretzel here. Why? Because it’s only the outer crust that’s pretzel, from what I’m told. Sneaky. Oh, and even after the pepperonis were picked off, the pizza is really quite greasy. The cheddar cheese sauce is pretty gosh darn prominent, and even for me, gets a little overwhelming at times. Toward the end of the slice things balance out a bit more, and the best bites include the salt-laden crust, the overall flavor just like your average soft pretzel dipped in cheese.

I was a bit disappointed in the texture of the end crust, though. The promotional photo shows it to be thick, like the roundness of a real soft pretzel. In actuality, the crust is pretty flat (see below). I was hoping for it to be fluffier, and well, more SOFT. It’s chewy, and a little difficult for someone with TMJ, like me, to bite through cleanly. The flavor is great, though, and the amount of salt on mine was just right.

Overall, it’s an interesting item, and I mostly enjoyed it. Pretzel seems to be the bacon of late, with pretzel buns, pretzel breading, and now, pretzel crust, becoming super trendy. I won’t complain about that. When it comes to Little Caesars’ jaunt into the pretzel product world, my main criticism would be the overly cheese-saucy middle of the pizza. But thank freaking goodness it isn’t mustard.

You know, marinara sauce isn’t exactly an odd pairing when it comes to pretzels, so I’m wondering how it would taste if used on this pizza. I even dipped a piece of the pretzel crust into some Crazy Sauce, and it was pretty delish. Maybe make the pizzas with marinara on one half, cheese sauce on the other? Or, what about leaving off the sauce altogether, and going with a few dipping sauces instead?

Would I Buy It Again? Probably so. Though I wouldn’t buy it all the time, the pretzel crust is a nice change of pace from the average pizza.

Need to Know: Little Caesars will be offering the limited edition Soft Crust Pepperoni Pizza from Sept. 1 to Oct. 26 as a $6 Hot-N-Ready from 4 p.m. to 8 p.m.

When Oreo announced their #THINSProtectionProgram,

When in St. Louis, @teddrewes_frozencustard is a m

The best frozen treats on the island? @joeyscustar

Feeling brunchy at @tipsyturtlesanibel! The salty-

Another trip to @schnappers.hots, another cup of p

I had read about the convenience store phenomenon

So many interesting popcorns to try! Which should

Picked up this @bluemonkeydrinks watermelon juice